My Hair Journey: From Platinum Blonde to Caramel 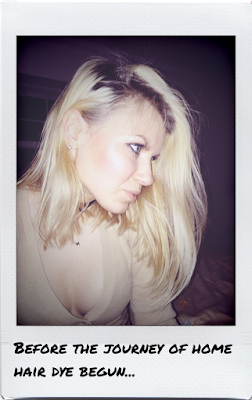 In the last few months my hair has gone through a rocky journey, transforming from platinum blonde to caramel golden light brown. It all started with a major roots outgrowth situation as seen in this image above. Historically I had my hair done in high end salons only and wouldn't dare to do any DIY as I didn't want to ruin the highlights that would take hours to get done and cost a ton of money. The result was totally worth it, the hair was healthy, beautiful and natural looking.


However during pregnancy and postpartum highlighting didn't seem to agree with my hair, it could be pregnancy hormone related. So for that reason I was very unhappy with the last couple of times I went to see my colourist and I actually ended up changing him as he did mess up one section of my hair so badly that even after correction it was still slightly visible. Becoming a mother changes everything, and I no longer have hours upon hours to sit in a hair salon covered in foil.


So the last time I went to a salon I have tried a different colourist and different salon. I made a conscious decision to get my hair bleached to platinum blonde hoping to reduce the colouring time as I would then only need to get my roots done. I did not want any yellow tone in my hair and explicitly asked for cool toned platinum blonde. The colourist explained that she will do the best she can but it really depends on the hair. Unfortunately there was a lot of yellow that kept coming through more and more with each wash. After the roots have grown out quite a bit I decided to try and do the roots myself at home. 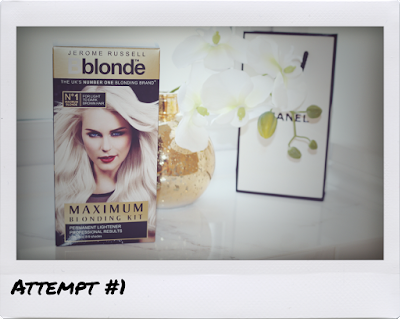 One day doing groceries I noticed Jerome Russell Bblonde Maximum Blonding Kit in N.1 (Maximum Blonde) and it looked quite promising. The packaging stood out and I felt fairly confident that not only will this kit take care of my roots but also kill the yellow in the length. Comparing this colour to other brands it was the lightest blonde I could get and it had no trace of any yellow tones. So I went home and opened the kit... 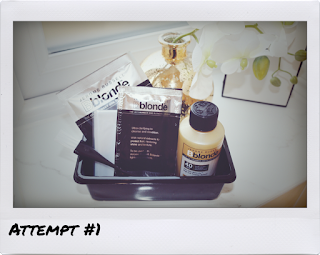 I was impressed by all the extras included in this kit: a fancy mixing tray, a brush and a development hat and all the other products that came out of the box. Of course you also get the protective gloves and other items that you tend to get in other brands like conditioning shampoo etc. 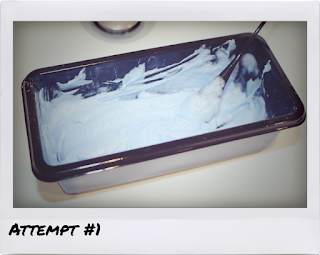 When I started mixing the High Lift Powder Bleach and Maximum Cream Peroxide I immediately noticed how dry the mix was and I had no idea how that amount of dry paste could cover all of my hair. My hair is medium long, on some images it looks longer than it actually is due to the angle the image was shot. I should also mention that my hair is not thick, and it's not very fine, so medium. 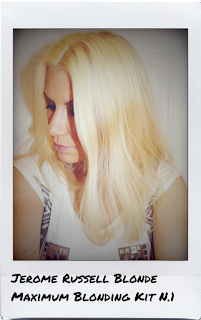 After I covered the roots I had still some paste left but not much. Unfortunately, there was only enough mix left to cover about half of my hair so as a result I tried very hard to spread it as much as I could, but again the dryness of the mix made it pretty impossible. Later, as I was in the middle of washing the bleach off I realised that the brand for some odd reason forgot to put a cut on to the conditioning shampoo sachet for an easy tear. So I had to stop and get scissors as there was absolutely no other way to tear that stubborn sachet. As a result all three of my brand new beautiful bathroom matts have been ruined by bleach stains.

At that point I started to get pretty p*ssed off with this product... Once I dried my hair the amount of yellow tone that was actually added to my hair was horrific and to top it all off it was pretty patchy over the length of the hair as this there was not enough product provided to treat medium length hair.  And even some patches on the roots were left untreated as the paste is so dry it makes it hard to evenly coat the hair, pretty damn awful! This product is particularly harsh and damaging on the hair compared to the other products. I would not recommend this product unless you don't mind  yellow toned platinum blonde roots as that is what it is able to deliver. Out of 10 points I would give this product 1.5 and that is for the supplies. 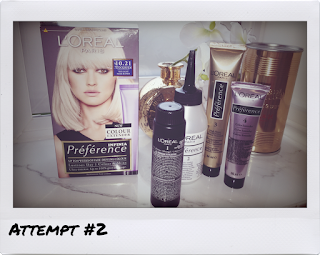 At that point I had to get another hair dye urgently to try and correct the mess that Jerome Russell Bblonde left me with, including lovely patches of unbleached roots. I spent a lot of time trying to find a hair dye that would kill that yellow tone. L'Oréal Infinia Préférence in 10.21 Stockholm (Very Light Pearl Blonde) seemed to be the right fit. It really did what it said on the box. I loved the texture of the mix which was very creamy and easily covered the roots and length and the smell was a lot more pleasant too. It also seemed less abrasive on the hair, after washing off the product hair was left silky smooth. Out of 10 this product gets an 8. 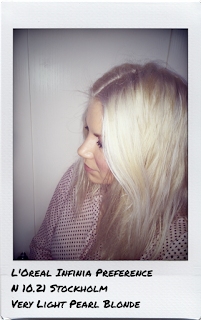 At first it left a little of the purple tint which created that cool tone which kind of looked trendy so I didn't mind, the purple does wash off with time and just leaves your hair with that clean cool tone. It has killed most of the yellow and I wish I went for this product to begin with. So it definitely did what it said on the box and I was very happy with the result. 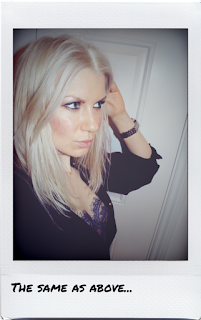 This image was taken after using that purple Colour Extender a few times, it has visibly toned down the yellow even further. However each time after using that purple conditioner the hair had a very strong purple tint but does wash off with subsequent washes. I was happy to continue using this product however unfortunately it was sold out at the place where I was buying it from for a few weeks and I did not want to have another root situation. So I had no other choice than trying another similar product from the same brand and range. 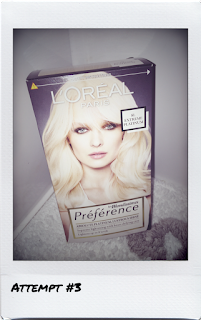 L'Oréal les Blondissimes Préférence in 8L (Extreme Platinum). On the box this colour was lighter than the 10.21 Stockholm but not as light as Bblonde N.1. I decided to risk it and apply all over the hair as I didn't want to end up with different colour on the roots and length. And that was a mistake as it fried my hair quite badly. The hair was left very very dry and the colour was super light and very "noticeable" to the point that I started hating taking my own pictures. Also in some random places it pulled yellow again. Out of 10 this product gets a 6. 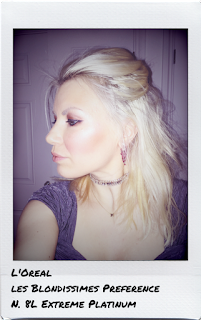 You can see the yellow tone appeared in random sections of the hair, for some reason mainly in the ends. At this point I was left rather frustrated at how difficult it is to maintain platinum blonde hair at home and so I decided to wave goodbye to the platinum and go in to a more natural looking direction and easy to look after. 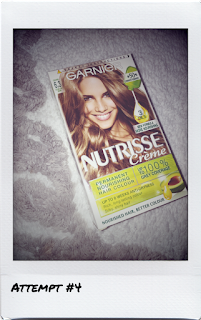 Being at a point where my hair is at its most driest it has ever been from all that bleaching I decided to pick a product this time that would be more natural and less damaging. It is of course not a completely natural product it still has lots of chemicals in there but at least it is a more gentle on the hair. Garner Nutrisse Créme in Caramel 6.3 (Gold Light Brown). It is very easy to use, and I absolutely loved the result. The fact that it is more gentle means that this hair dye will have a fluctuation, it will come out at its darkest straight after and thereafter every wash it will get slightly lighter and lighter which is perfect for me as I don't want to go too dark anyway and want to maintain that goodness. Out of 10 this product gets a 9. 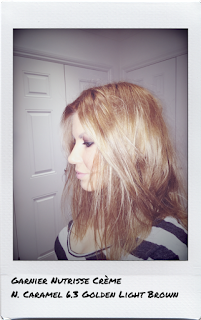 So here you can see the result straight after I have used it for the first time. The bleached platinum hair provides a great base for caramel toned colour as it will give it that golden glow/lift and makes it look like you just came from a sunny holiday. So I really loved the result and it is a very flattering colour to shift to from platinum blonde. 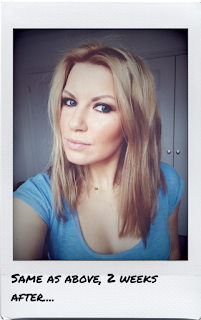 Here you can see what the colour looks like after it has settled after a few washes. It's still very natural and warm. Because the colour does wash off in the beginning I would highly recommend to use an old towel as it will transfer and stain. After about second or third wash the colour settles and you don't need to worry about getting your normal towels dirty. 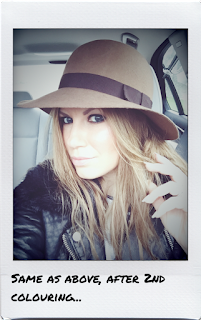 Now I always make sure to have two boxes of this hair dye as a back-up because I don't want to mess with my hair anymore. So here you see the colour after second colouring, I could have just done the roots but I did the lengths as well just for the initial two colourings to get the colour even. After all that messed-up over-bleaching the colour would concentrate on some of the areas deeper than others  but after the second colouring it is all even and good now. It seems to colour the natural darker roots and over-bleached length equally so there doesn't seem to be a colour difference.

The only criticism I do have for this product and that is why it does not get a 10 out of 10 is because when I coloured my hair second time it came out much darker for some reason and did not look like the image on the box. However after the first wash it does wash out and looks like it is supposed to, so don't panic if that happens to you. For now this is what I shall stick with as being a mommy to a 15 months old baby boy means lots of running around and not enough time to myself.

beautyLOVE
Posted by Alyona at 22:20 No comments: